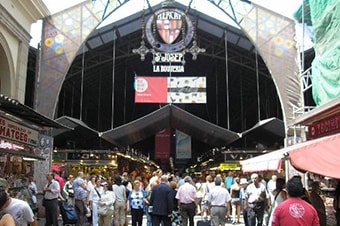 Boqueria Market
Dating back to 1217, the Boqueria Market began as an open-air meat market where pigs were bought and sold. It grew to include butchers and fishmongers, and in 1914 construction began and the metal roof that still exists today was erected. Considered Barcelona's most central produce market, the stalls showcase Catalonia's gastronomical specialties, a bounty of the finest vegetables and fruits as well as pungent cheeses, savoury meats and delectable sweets.

Santa Caterina Market
Under a colourful roof, find a beautifully refurbished version of Barcelona's first covered food market. Originally built in 1845 on the former site of the Convent of Santa Caterina, it was the neighbourhood's community market. Today, it's a gleaming, modern marketplace with stalls laden with local and exotic delicacies and outstanding restaurants.

Jamon Tasting at Moniberic
Jamon is the Spanish word for ham and one of the area's most important delicacies. In Moniberic you can enjoy the widest selection of Iberian hams. You will receive an introduction of this famous product by one of the Jamon maestros. Get to know the different kinds of jamón and its Appelations of Origin. Ask anything you are curious about, it's been 3 generations dedicated to this delicacy.

Santa Maria Del Mar
This stunning example of Catalan Gothic architecture soars from the narrow streets of La Ribera. The cornerstone was laid in 1329 at the height of Barcelona's dominance in shipping and merchant trade. Light streams through the high windows and widely spaced columns of this magnificent basilica with its rose window and stained glass. Visit inside if opening times permit it.

Most of the shops are closed on Sundays.

Return to the coach and drive to Plaza Catalunya

Walk to the Jamon Experience center and visit