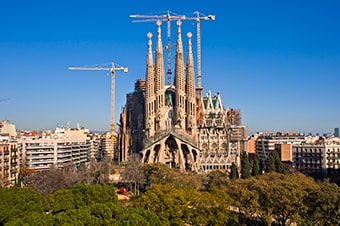 What You Will Visit:
Sagrada Familia (the Holy Family Church)
One of the most visited monuments in Spain, the Sagrada Familia (Holy Family Church) is an unfinished Gothic-inspired masterpiece by famed architect Antoni Gaudi. Towering over Catalan, it is an expression of Gaudi's strong nationalistic and religious feelings. Construction began in 1882, and in 1911 Gaudi devoted himself entirely to the church, working for 40 years and living on site. It remains unfinished with a completion date set for 2026, to coincide with the 100th anniversary of Gaudi's death. Eight of the intended 18 symbolic spires at this UNESCO World Heritage Site reach toward the sky, and the interior, awash in color from the stained-glass windows, is an opulent wonder of in/tricate mosaics, sculptures and façades.

What you See Along the Way:
Enjoy a panoramic drive along Passeig de Gracia, a stunning promenade and fashionable boulevard home to chic boutiques, posh hotels and the finest examples of modernist architecture, including famous structures by Gaudi.

Photo Opportunities:
Casa Batlló:
Built in 1877 and known locally as the 'House of Bones,' due to its skeletal appearance, this breathtaking building features irregular oval windows, intricate mosaics, sculpted stonework, and an arched roof reminiscent of the back of a dragon with scales that appear to change colors as you walk past them. Capture the colorful façade with its sea blue and purple tiles and the wavy-shaped balconies. Then point your camera down toward the pavement, carved with images of starfish and octopi.
Casa Mila:
One of Gaudi's most accomplished works, La Pedrera, known locally as Casa Mila, was constructed over a five-year period beginning in 1905 and was the last civil work designed by architect Antoni Gaudi. Built entirely of natural stones, its monochromatic design is adorned with iron art nouveau balconies. Point your camera to the rooftop, crowned with large surrealist chimneys.
Shopping:
Time is provided to browse the gift shop at Sagrada Familia for a plethora of Gaudi-related mementos, books, posters and gifts.

Departure from pier to Sagrada Familia

Reboard the motorcoach and return to the pier