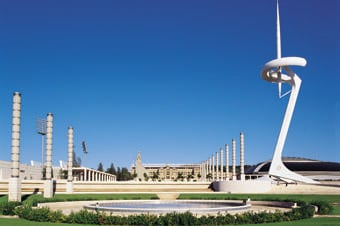 This three-and-a-half-hour driving tour of Barcelona caters to passengers who are keen to enjoy this glorious city up close, yet do not wish to spend a lot of time walking. It is also a fun option for passengers who have flights booked later in the afternoon and are looking to spend an enjoyable few hours before leaving for the airport.

The trip starts when you meet your guide and motorcoach at the pier and head towards your first photo opportunity of the day, the Columbus Monument. This impressive column was erected in 1882 for Christopher Columbus to celebrate his historic return from the Americas.

Moving on to a panoramic viewpoint, you will then view the Moorish-inspired Arc de Triomf which was built in 1888, and the Olympic Village, which sits by the waterfront and was one of the most significant locations for the 1992 Olympics.

Staying on the motorcoach, you will travel to Antonio Gaudi's unfinished yet majestic masterpiece, the La Sagrada Familia church. This amazing structure is one of Spain's most popular tourist attractions and you will have half an hour to take pictures with your guide, who will be on hand to describe the church's features in detail, including the breathtaking nativity facade, massive spires, and modern stained glass windows.

Climb back onto the motorcoach and you'll driver through the Passeig de Gracia, a wide boulevard lined with almost magical-looking Art Nouveau buildings, winding around Barcelona's grand university building. The motorcoach will then circle the Plaza España, one of the busiest junctions in the city, which sits at the foot of Mount Montjuic on a site that was previously used for public hangings.

From here, you will wind your way up Mount Montjuic, a 700-foot-tall hill, to enjoy panoramic views of the city. You will then circle the Olympic Ring, an architecturally fascinating complex built specifically to host the 1992 Summer Olympics. Both the opening and closing ceremonies were held here and you'll have ample opportunities to take photographs before driving on towards the grandiose Miro Foundation building. This museum of modern art was built in 1975 to honor Joan Miro, Barcelona's famous painter and sculptor, and is your last stop of the day before the scenic drive back to the airport.

This tour may be offered on the day of disembarkation to passengers with late flights after 1:30 pm. Passengers who have purchased a Princess Transfer will be able to purchase this tour at a reduced rate. Please see Tour Office onboard.

There is a two-block walk from the bus parking area to La Sagrada Familia for those that wish to take pictures.

Depart the ship for a panoramic drive past the Columbus Monument, Arch the Triumph, and Olympic Ciutadella Village on the way to the La Sagrada Familia

Walk to Sagrada Familia from parking area and outside explaination

Reboard your motorcoach and drive to Montjuic for a photostop

Re-board your motorcoach and transfer to the airport