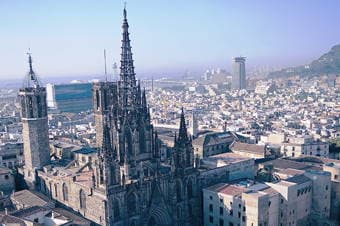 On arrival at the harbor, join your guide for this four-hour narrated walking tour of Barcelona including the ancient, winding Gothic Quarter.

The Barri Gothic is the center of the old city of Barcelona and despite many changes during the 19th and early 20th centuries, many of the buildings you will see date back to medieval times, and some as far as Roman times. In fact, the remains of a squared Roman wall are clearly visible in some parts of this old town, which boasts winding narrow streets and quaint little squares. Much of the quarter is closed to regular traffic adding to the pleasant old-timey feel, and it's here that you will tour the wonderful Cathedral of Santa Eulalia, an imposing 600-year-old building complete with magnificent spires, that was constructed between the 13th and 15th centuries. You will have 30 minutes to fully absorb this incredible building and view the cathedral's stained-glass windows and exquisite choir screen.

You will then enjoy time strolling through the labyrinthine streets of the Barri Gothic on a guided narrated walking tour, where you will also have the chance to shop for gifts and souvenirs. Marvel at the Plaza San Jaime, where former palaces now house Catalonia's government, as well as the many impressive courtyards that are home to such historic buildings as Casa del' Ardacia, the Historic Archive and King's Square, site of the former palace of the kings of Catalonia-Aragon.

For those who love to shop, you will get a kick out of walking up and down La Rambla, a mile-long tree-lined pedestrian walk that runs through the center of Barcelona and boasts many different shops.

However, all good things must come to an end, but that's only because there are more good things to come as you return to the motorcoach for the short ride to Montjuic Mountain for a photo stop at a breathtaking viewpoint.

At 700 feet above the city, you will experience panoramic views of the harbor before a short ride around the Olympic complex, built to host the 1992 Summer Olympics. The opening and closing ceremonies were held at the stadium here but you will also be able to enjoy the modern architecture including the many fountains and squares.

Then, it's time to board the motorcoach for the journey back to port, past many sites including the Columbus Monument, erected to celebrate Christopher Columbus's triumphant return from the Americas.

Flash photos are not permitted in the Cathedral. Wear proper attire that covers shoulders and knees for the visit to the Cathedral. On Sundays, church holidays and after 12:00pm, tour groups are not allowed inside the Gothic Cathedral during services.

This tour is not suitable for passengers with walking difficulties

There is a 2.5 hour walk in Gothic Quarter

Guided walking tour of the Barri Gotic and shopping

Transport type:
Walking
Time at site:
01:20
Free time at site:
20
Inside visit:
No
Air conditioned:
No

Drive by Olympic Complex and return to your ship