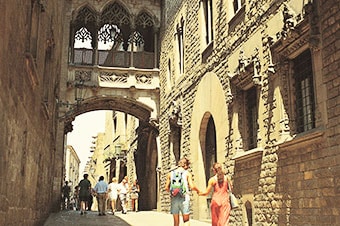 What you will visit:
Gothic Quarter (Barri Gotic)
Barri Gotic is the center of the old city of Barcelona, and despite many changes during the 19th and early 20th centuries, many of the buildings date back to medieval times and some as far as Roman times, including the remains of a squared Roman wall. This old town boasts winding narrow streets and quaint little squares. Much of the quarter is closed to regular traffic and you will explore it on foot.
Barcelona Cathedral (Cathedral of Santa Eulalia)
The spectacular Gothic Barcelona Cathedral is the seat of the Archbishop of Barcelona, Spain. This imposing 600-year-old building, dedicated to Santa Eulàlia, the patron saint of Barcelona, stands at the Pla de la Seu, in the center of the Gothic Quarter. Complete with magnificent spires, it was constructed between the 13th and 15th centuries. The interior boasts stained-glass windows and an exquisite choir screen.

Montjuic Mountain
Ascend the 700-foot-tall Montjuic Mountain and arrive at the Olympic Ring, one of the major venues for the 1992 Games and the site of the opening and closing ceremonies. The mount is an architectural delight, featuring parks, fountains and museums, and is famous for its panoramic views of the city.

What you will see along the way:
Settle into the motorcoach and watch the highlights of Barcelona go by. Your guide will point out many landmarks, beginning with the Gothic Quarter and its 13th-century cathedral. Drive down Paseo de Gracia, one of the most opulent avenues in Barcelona, showcasing many of the city's modernist structures, as well as an important shopping and business district. Keep an eye out or the spectacular Sagrada Familia, Antonio Gaudi's magnificent church that is still unfinished after a century of toil. This awe-inspiring building features massive spires but lacks completed walls and a roof. Then, follow Sepulveda Street, which runs through to the Plaça d'Espanya and features two huge Venetian towers. Continue on for the Olympic Ring, the stunning stadium complex that was created for the 1992 Summer Olympics, on the way to Montjuic Mountain for breathtaking vistas.

THIS TOUR IS NOT AVAILABLE TO PASSENGERS EMBARKING OR DISEMBARKING IN BARCELONA.
Wear comfortable walking shoes.
Use of an audio headset (included) will enhance your tour experience.

Board your motorcoach to the Columbus Monument

Walking to the bus stop

Reboard your motorcoach, Montjuic panoramic drive and return to the ship