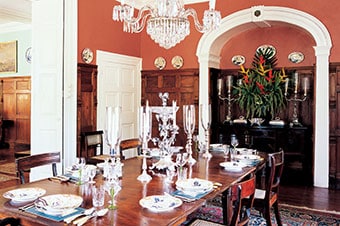 The newest attraction to the St. Nicholas Abbey Great House Plantation and Distillery, this 1914 historic steam locomotive, with three carriages, follows the tracks across the lush 400-acre sugarcane plantation grounds, around a sparkling lake where a variety of migrating birds find shelter, and through a mature mahogany forest. Admire the St. Nicholas Abbey Great House and culminate at Cherry Tree Hill, an elevated point offering breathtaking highland views of the island's rugged east coast. Before departing the station, receive a short presentation on the railway's operation and security regulations.

St. Nicholas Abbey Great House
A lovingly restored manor home built in 1660 is an architectural gem and one of only three authentic Jacobean buildings in the western hemisphere. The Dutch gables and rose-colored roof hint at the splendor found inside. The home boasts a dramatic Chinese Chippendale staircase, elegant antiques, porcelain figurines and stunning artwork, and guided tours showcase the mansion's grounds, sugar plantation and historic rum distillery that produces St. Nicholas Abbey Rum. A documentary from the 1930s details the life of yesteryear spent on this sumptuous property.

What you will see along the way:
See the scenic splendor of Barbados by rail and by motorcoach, taking in verdant hillsides of softly swaying sugarcane, winding roads bordered by plants, lush, overhanging trees, and coral stone walls. When you depart the majestic St. Nicholas Abbey property, your tour will conclude with a leisurely meander along the east coast road to marvel at the rugged Atlantic shoreline.

Photo Opportunities:
You'll want to have your camera ready for every twist and turn of your railway drive, but you'll stop at Cherry Tree Hill, approximately 850 feet above sea level, to focus your lens on the panoramic vistas spanning the dramatic Atlantic coastline. On your return drive to port, an additional photo stop is made at Morgan Lewis Windmill to capture one of the last functioning windmills on the island.

Tasting:
Barbados is known as the birthplace of rum, so it's no wonder that this experience culminates with a tasting of this amber elixir. The rum distillery is perched on the edge of a picturesque gully surrounded by exotic foliage. Here, you'll engage in a lively discussion about rum production, learn how sugarcane, aromatic molasses and filtered water are turned into rum, and enjoy a tasting of award-winning liquors.

Deaprt port and drive to venue