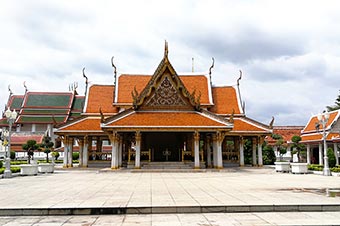 Your full-day tour begins as you board your motorcoach for a scenic, two and a half hour drive to Bangkok, considered the "Venice of the East." En route, you'll travel through tropical countryside offering picturesque views of tapioca fields and small rural towns. Keep your camera ready for a myriad of photo opportunities.

Your first destination is the awe-inspiring Wat Po, one of the largest and oldest wats (temples) in Bangkok. Founded in the 17th century, Wat Po is home to more than one thousand Buddha images, as well as the Reclining Buddha, one of the largest single Buddha images. In 1832, King Rama III enlarged the temple and turned it into a center of learning, making it Thailand's first university. The temple is also considered the pre-eminent place of learning for the ancient Thai medicinal art of massage.

You're free to browse for souvenirs in the small local gift shop inside the temple before boarding your motorcoach for a short drive to a local restaurant. After savoring a delicious international buffet, you'll make your way to Wat Suthat, known for its Phra Sri Sakyamuni Buddha statue, an impressive bronze Buddha image that stands over 25 feet tall, and its magnificent doors and giant swing. You're sure to marvel at the huge red teak arch, the remains of an original swing, once the center of an annual ceremony where young men would try to swing high enough to retrieve a sack of gold tied to a pole in the air. So many men died in the attempt that the ceremony was banned in the 1930s.

Inside, the cloisters are lined with 156 gilded Buddha statues, six feet in height. Twenty-eight Chinese pagodas, representing the 28 previous lives of Buddha, envelope the monastery where the main Buddha statue is installed. Paintings cover an area of 27,450 sq. ft., and are perhaps the most extensive and important of their kind in Thailand. Take note of the doors to the cloister. Each is painted and gilded with colorful scenes from the Ramakien, Thailand's national epic, derived from the ancient Sanskrit epic, Ramayana.

Next, you'll take a ride on a tuk tuk, a motorized rickshaw named for the sound of its engine. You'll travel around the inner part of Bangkok and stop at the Jessadabordin Ground. Here, you'll witness a stunning Thai architectural-styled, open pavilion, and catch a glimpse of the Golden Stupa Mountain Temple, the highest temple in Bangkok, famed for its central golden mound-like structure. You'll also see Radchanadda Temple, best known for the Loha Prasat, a multi-tiered structure 118 feet high with 37 metal spires, signifying the 37 virtues toward enlightenment. Also within sight is the Makahan Fort, just one of the two remaining fortresses of medieval Bangkok.

Before calling it a day, you'll visit a reputable shopping venue and have ample time to browse for handicrafts, jewelry, souvenirs and gifts. You'll board your motorcoach and enjoy a relaxing two-hour drive back to the pier.

The drive between Laem Chabang and Bangkok is approximately 2 1/2-hours each way.

Suitable attire is required for palace and temple visits. Shorts are not permitted. Women must have their shoulders and knees covered. Turtleneck shirts for men are not allowed. Wear comfortable low-heeled, closed-toe (no open toes or heels) walking shoes. Shoes must be removed before entering the temples hall. Access to some venues requires climbing stairs.

Space for this excursion is limited.

This tour only operates on selected voyages.

Depart from ship and drive to Reclining Buddha Temple

Enjoy your buffet lunch at a local restaurant