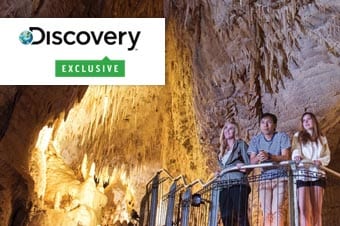 What you will visit:
Ruakuri Caves
The largest caves in the Waitomo area, Ruakuri Caves are a true geological phenomenon. The caves' subterranean labyrinth boasts winding passageways, vast echoing caverns, and deep crevices. This unique karst limestone landscape was formed under the sea from the solid remains of millions of marine creatures around 30 million years ago. But to the Maori, the Ruakuri Caves are a place of strong spiritual and cultural significance, and it is believed they are the underground realm of Papatunanuku, the earth mother, and touching the limestone's cool surface makes a symbolic connection with the divine world below.

Please note:
Be sure to wear sturdy, non-slip walking shoes and a light jacket (it can be quite cool inside the cave). Once inside, you will need to walk down a 49-foot spiral staircase, then along a four-mile underworld tunnel and through narrow corridors on the guide-led tour. A portion of the proceeds of this tour are made to the Department of Conservation for the care and protection of the environment and wildlife.

What you will see along the way:
It's an approximately 3-hour motorcoach drive to Ruakuri Caves. Travel south into the countryside, where the fields are dotted with sheep and cattle, and through the towns of Ngaruawahia, home of the Maori king, and Taupiri, known for its sacred mountain. Once inside the cave, you'll marvel at the glimmering glowworms as well as the dynamic natural environment of formations such as "The Drum Passage," an area of crystalline shapes, cave coral and breathtaking columns, and "The Pretties," a miniature gallery of flowstone and stalactites.

Lunch:
A lovely lunch is served buffet-style at Waitomo Homestead.

Be sure to wear sturdy, non-slip walking shoes and a light jacket (it can be quite cool inside the cave)
The drive to the Waitomo Glow Worm Grotto is approximately three hours each way.
Tour order may vary.

Depart Auckland and drive to Ruakuri Caves (including Cave tour)