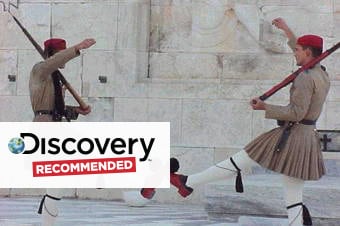 Board your air-conditioned motorcoach for a 30- to 40-minute scenic drive into the heart of Athens.

Considered one of the great museums of the world, the New Acropolis Museum, an ultra-modern showcase located at the foot of the Acropolis, displays a dramatic collection of artifacts and statues from the Pantheon, the Porch of the Caryatids, and surrounding sites.

The word Acropolis means "high city" in Ancient Greek, and your next destination sits on a rocky perch over 500 feet tall. A sacred place for Athenians since Mycenaean times, the Acropolis is a symbol of Greek history, democracy and the ingenuity of the ancient world. Your guided walking tour begins as you climb the 80 steep steps through the Propylaea, the monumental gateway that extends 150 feet across the Acropolis' western side.

Beyond the Propylaea, on the highest point of the Acropolis, stands the Parthenon, one of the greatest monuments of ancient civilization and one of the most recognizable. Dedicated to the virgin goddess Athena, the white Pentelic marble temple was built 446 - 437 B.C. Its architectural sophistication has captivated visitors for centuries.

Beyond the Parthenon lies the Erectheum, situated on the most sacred site of the Acropolis, where Athena and Poseidon are said to have held a contest to decide who would be Patron of the city. When Poseidon thrust his trident into the ground, water burst forth, but when Athena touched the ground with her spear and an olive tree grew, she was named ruler of the city. The building itself contains the graceful Porch of the Caryatids, with its exquisite, delicate row of maidens. Legend has it that when Lord Elgin removed one of the original six statues for his Scottish mansion, the remaining five maidens could be heard crying in the night.

The Ancient Tastes Restaurant, located just outside of central Athens, is the setting for a feast of dishes prepared according to ancient recipes. During the lunch, enjoy a Greek dance performance. After lunch, you will travel to Plaka, a lively marketplace located in one of the oldest areas of Athens.

Picturesque Plaka is home to cobblestone lanes and petite shops filled with antiques, jewelry, and handicrafts. Many of the streets have been closed to automobile traffic, so browsing the area is a delight. Small local museums include the Museum of Greek Folk Art and the Jewish Museum of Greece. An hour is provided to explore this area independently.

Your guided motorcoach tour then continues through the streets of Athens. Have your camera ready for photo opportunities, including the magnificent Old Olympic Stadium, the Parliament Building, and Syntagma Square for the Tomb of the Unknown Soldier. If you are lucky you will see the hourly ritual changing of the guards called Evones. Snap a picture of their unique costumes, complete with pom-poms on the toes of their shoes.

Please be aware that ongoing restoration work is often carried out at the Acropolis.

The tour involves climbing approximately 80 steps at the Acropolis as well as walking over some uneven and slippery paths. There will be a 10-minute walk from the motorcoach drop-off point to the Plaka area. Wear comfortable walking shoes. Passengers with limited mobility should take this into consideration before booking the tour.

Flash photography is not permitted in the Acropolis Museum.

Photo opportunity at Parliament & Tomb of the Unknown Soldier