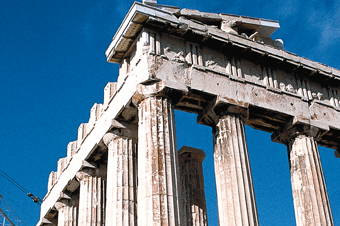 At the completion of your cruise, this debarkation tour offers a thrilling opportunity to experience the Acropolis and to tour the legendary city of Athens. A guided walking tour of the historic ruins is combined with a motorcoach city tour before conveniently dropping you off at the airport.

Beyond the Propylaea, on the highest point of the Acropolis stands the Parthenon, one of the greatest monuments of ancient civilization. Dedicated to the virgin goddess Athena, the white Pentelic marble temple was built from 446 - 437 B.C. Its architectural sophistication has captivated visitors for centuries.

Your Athens tour continues as you drive through the city, viewing its major highlights. Your narrated drive will cover a host of celebrated sights, including Hadrian's Arch, the statue of Lord Byron, the Temple of Olympian Zeus, Constitution Square, the former Royal Palace, the National Gardens, the Academy, and the University Library.

Along the way you will pass the Old Olympic Stadium, where a brief photo stop is offered. Re-built to host the first modern Olympic Games in 1896, and used again in the 2004 Olympics for the finish of the marathon and the archery competition, this marble stadium stands on the site of the original stadium of Ancient Athens, which dated from the 4th century B.C. At the completion of your tour you will be taken to the Athens airport for flights departing after 3:00 pm.

This tour may be offered on the day of disembarkation to passengers with late flights after 3:00pm.

Re-board your motorcoach and drive to Athens airport