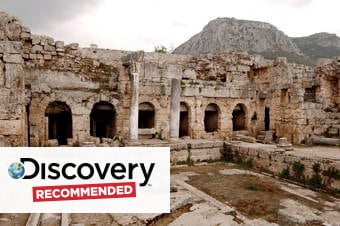 Board your motorcoach for the approximately 30- to 40-minute narrated drive into the heart of Athens. You'll pass a host of major sites, including Hadrian's Arch, the statue of Lord Byron, the Temple of Olympian Zeus, Constitution Square, the former Royal Palace, the National Gardens, the Academy, and the University Library.

The Acropolis dominates the landscape and your guided walking tour begins with a steep ascent to the Propylaea, the gateway to this ancient site. Known as the "Sacred Rock," the Acropolis is one of the world's most important landmarks and the most recognized monument on it is the Parthenon. Located on the highest point, it is a perfect example of Doric architecture and was built in Pentelic marble.

Beyond the Parthenon lies the Erectheum, situated on the spot where Athena and Poseidon are said to have held a contest to decide who would be Patron of the city. When Poseidon thrust his trident into the ground, water burst forth, but when Athena touched the ground with her spear and an olive tree grew, she was named ruler of the city. The building itself contains the graceful Porch of the Caryatids, with its exquisite row of marble maidens. Legend has it that when Lord Elgin removed one of the six original statues for his Scottish mansion, the remaining stone maidens could be heard crying in the night.

Following your exploration of the ruins, enjoy a narrated driving tour throughout Athens followed by a traditional Greek luncheon buffet. Then, drive down the modern highway past Eleusis enjoying views of the Saronic Gulf en route to the Corinth Canal. Your drive to ancient Corinth passes the dramatic Acrocorinth, the mammoth citadel that guarded the city.

The Corinth Canal is considered an engineering wonder. Carved into a massive rock, the 76-foot wide and 26-foot deep canal dramatically separates the Peloponnese from the rest of mainland Greece. Before the Corinth Canal was constructed, ships had to sail all the way around the Peloponnese, adding 185 nautical miles and several extra days to the journey. A fantastic photo opportunity can be had 200 feet above water, from the center of the bridge that spans its banks.

Famous for its "wicked ways," the city was introduced to Christianity by St. Paul and was known as the wealthiest city in Greece, once home to a forum even larger than the one in Rome. You will have an opportunity to explore the remains of the paved, 25-foot-wide Lechaion Road and the Doric Temple of Apollo, one of the oldest religious monuments built in dedication to this god.

Peruse the nearby Corinth Museum, which houses an impressive collection of antiquities unearthed from nearby ruins. Most of the antiquities, including superb mosaics, are Roman in origin. The original Greek city-state was destroyed by Rome in 154 B.C. and rebuilt as a Roman colony.

A brief shopping excursion in the area includes ample time to purchase souvenirs and mementos from this unforgettable day before a relaxing, one-hour drive back to port.

The drive from Piraeus to Corinth is approximately 1.25 hours each way.

Security restrictions at the Acropolis prohibit large bags and backpacks. Flash photos are not permitted in the Corinth Museum.

Please be aware that ongoing restoration work is often carried out at the sites visited. Passengers should expect lines and crowds at the Acropolis.

Photo stop at the Corinth Canal

Stop for shopping near Corinth

Depart from shopping for return to ship