A Taste of Athens 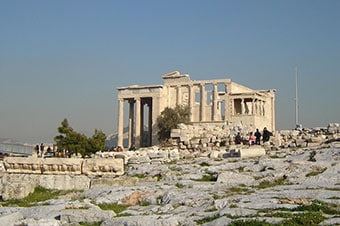 The word Acropolis means "high city" in Ancient Greek, and your next destination sits on a rocky perch towering more than 500 feet. A sacred place for Athenians since Mycenaean times, the Acropolis is a symbol of Greek history, democracy and the ingenuity of the ancient world.

Board your comfortable motorcoach and set off on a 30- to 40-minute drive to the heart of Athens. The guided walking tour begins when you climb the 80 steep steps through the Propylaea, the monumental gateway that extends 150 feet across the Acropolis's western side. Your efforts are rewarded with panoramic views of Athens below.

As your tour commences, take in the wonders of these ancient ruins, fill your camera with extraordinary images and learn the stories behind each of its landmarks. On the highest point of the Acropolis stands the Parthenon, one of the greatest monuments of ancient civilization and a perfect representation of Doric-style architecture. Dedicated to the virgin goddess Athena, the white Pentelic marble temple was built between 446 and 437 B.C. An enduring symbol of ancient Greece, the Parthenon has survived the passage of time, and its architectural sophistication still impresses all who study it.

On the north side of the Acropolis lies the Erectheum. This sacred site is where it is said it was once decided which god would rule the city. When Poseidon thrust his trident into the ground, water burst forth, but when Athena touched the ground with her spear and an olive tree grew, she was named ruler of the city. On the south side of the building, you will discover the Porch of the Caryatids, or Porch of the Maidens. Notice how these graceful sculptures are engineered to support the weight of the roof on the slender neck of each female figure. Legend has it that when Lord Elgin removed one of the original statues to decorate his Scottish mansion the remaining stone maidens could be heard crying in the night.

After your guided tour, enjoy a little free time to explore on your own before you resume your drive to see the city's major sites. Pass Hadrian's Arch, the statue of Lord Byron, the Temple of Olympian Zeus, Constitution Square, the former Royal Palace, the National Gardens, the Academy and the University Library. Pause at the Old Olympic Stadium for a photo stop. Rebuilt to host the first modern Olympic Games in 1896, this marble stadium stands on the site of the original stadium of ancient Athens, which dates from the 4th century B.C.

A pedestrian street by the Acropolis will bring you to one of Athens' most popular wine bars, where you will have a chance to sample eight wines from all areas of Greece, including the islands. Each wine will be presented by an oenologist, and the tasting will be rounded off by a plate of local cheeses and cold cuts – a real treat for wine lovers!

At the conclusion of this fascinating day savoring the sights and tastes of Athens, relax on the return to port.

This tour is not available to passengers beginning or ending their voyage in Piraeus (Athens).
Use of an audio headset (included) will enhance your tour experience.

Board motorcoach for Acropolis

Visit Acropolis and enjoy some free time to explore