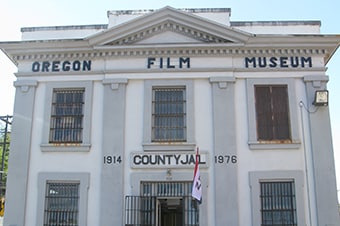 It's not only tourists who fall in love with the city, its history and spectacular scenery, but also movie companies. Did you know that the town of Astoria has been featured in many of the most popular movies of the '80s and '90s? Join your guide for a three-hour tour of the many locations with photo stops along the way.

After boarding your motorcoach you'll head to the site where Free Willy gained his freedom. Travel through the coastal towns of Warrenton and Hammond on your way to the Pacific Ocean for a photo stop of the wreck of the Peter Iredale. Seen in many commercials, television programs and movies, this most photographed site in Oregon has been here since 1906.
Back in Astoria, travel past sites from Kindergarten Cop, stop for a breathtaking view of the Astoria Bridge, and venture through local neighborhoods en route to the Astoria Column. Situated on Coxcomb Hill, Astoria's highest point and standing a majestic 125 feet high, the Column was used as the backdrop for Kindergarten Cop, Free Willy, Teenage Mutant Ninja Turtles III, The Goonies, and Short Circuit. Take in the panoramic views of the Columbia River and surrounding area.

Then, you'll continue through the town for views of the "Goonies" house. This charming Victoria-style home had a starring role as the home of the main characters in The Goonies, the 1985 comedy adventure starring Sean Astin and Josh Brolin. Enjoy a photo stop at the Flavel House Museum. Built in 1885, it's one of the best-preserved examples of Queen Anne-style architecture in the Northwest and its exterior was seen in the movie The Goonies.

Your last stop is the old Clatsop County Jail. Used from 1914 to 1976, the jail is not only noted for being the longest used, freestanding jail in Oregon but The Goonies, Come See the Paradise and Short Circuit were filmed here. You'll also pass the location of the former Seafare Restaurant used during the filming of Kindergarten Cop starring Arnold Schwarzenegger.

Return to your ship with some Hollywood history, having enjoyed some breathtaking views and a desire to watch some of the many movies filmed in Oregon.

Wear comfortable walking shoes and clothing suited to the day's conditions. Bring a light jacket or sweater. Tour order may vary. All photo stops are for the exteriors of venues; no interior visits.

Transfer to and photo stop at Astoria Column

Transfer to East Basin for views of movie sghts