Fort Stevens - Behind the Scenes 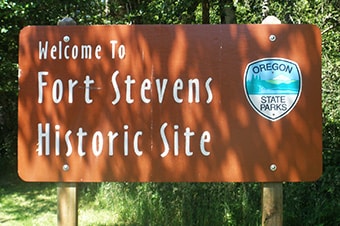 After boarding your school bus, you'll travel across Youngs Bay Bridge for the short journey to Fort Stevens State Park. Once you arrive a friendly and knowledgeable guide will take you on a tour of this 150-year-old fort and share it's fascinating history.

Built by the U.S. Army in the waning days of the Civil War it may seem odd that Oregon could have been the site of a battle or two. But the U.S. government was fearful that the British would join the Confederates, so the fort was established to protect the North from a possible English invasion. And to protect it from land attack, the fort was surrounded by a moat with a drawbridge!

Although Fort Stevens did not see action in the Civil War, it did sustain an attack during World War II. On June 21, 1942, a Japanese submarine fired 17 shells on the gun emplacements at Battery Russell, making it the only U.S. fortification in the contiguous 48 states to be bombed by a foreign power since the War of 1812. No damage was incurred, however, and the Army didn't return fire. Shortly after World War II, the fort was deactivated and the armaments were removed.

Today, the gun batteries, fortifications and other buildings are preserved along with 3,700 acres of woodlands, lakes, wetlands and beaches.

Your guide will continue to lead you through the complex and its bunkers, abandoned gun batteries, and tower stations. Then, you'll venture underground to the Battery Mishler. Here, during WWII, 10-inch cannons were mounted on disappearing carriages, which hid the guns behind concrete and earthen walls when not being fired. These powerful guns could fire 617-pound shells at a distance of nine miles.

The museum will be your last stop before heading back to the pier. Enjoy browsing through the interesting artifacts that date back to the Civil War and stop in at the gift shop, which offers a variety of souvenirs commemorating your visit.

Non air-conditioned school buses are utilized for this tour.

Depart from ship for a guided tour of Fort Stevens