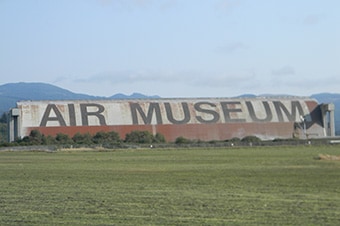 Escape for the day and discover all the rugged and breathtaking beauty that Oregon has to offer. Have your cameras handy; not only will you see stunning examples of Victorian architecture in Astoria but you'll also witness the mighty Columbia River, drive through the coastal villages of Seaside and Cannon Beach and enjoy lush green forests and spectacular views of the Pacific Ocean along your route. And that's not all - once you reach the town of Tillamook, you'll take a tour of Tillamook Air Museum and Tillamook Ice Creamery & Cheese Factory.

Your full-day adventure begins at the pier and crosses New Youngs Bay Bridge. Sit back and marvel at the impressive views of Saddle Mountain, one of Oregon's highest peaks; the city views of Astoria, and the Astoria-Megler Bridge, noted as the longest bridge in Oregon and at 4.2 miles, it has the distinction of being the world's longest continuous truss bridge.

As your motorcoach winds its way along the 110-mile section of the Pacific Coast Highway, you'll travel through the Oregon Coast Range. This lush mountain range of Sitka spruce, western red cedar, Douglas fir, and hemlock trees march down to the sea and its powder soft beaches. Along your journey, be on the lookout for wildlife such as elks, bears, rabbits, eagles and blue herons.

As you get closer to Tillamook, you'll drive over Neahkahnie Mountain. Rising over 1,590 feet above sea level, legend has it that buried deep somewhere in the mountain is a lost treasure, hidden by Spanish sailors in the late 16th century.

Your first stop is the Tillamook Air Museum, which is housed in a rare World War II blimp hangar. Reaching over 15 stories high and stretching over seven acres, it's the world's largest clear span wooden structure. Not only can you see numerous U.S. warplanes but actually climb into a jet simulator, and explore the exhibit hall that features historical wartime and aviation artifacts.

Your next destination is the legendary Tillamook Ice Creamery & Cheese Factory. Here, you can watch the cheesemakers at work, enjoy a sample or two of cheese and purchase a tasty treat of ice ice cream and fudge if you'd like to indulge.

During your tour, you'll have enjoy a picnic-style box lunch and a refreshment.

Finally, you'll climb back on your motorcoach and venture back north on Highway 101 to enjoy the scenic wonders of the coast. Your guide will regale you with additional history and stories of the area and provide scenic photo stops along the way, weather and time permitting.

Transfer to and stop at Neahkanie Mt. Lookout

Transfer to and photo stop at Tolovana Park