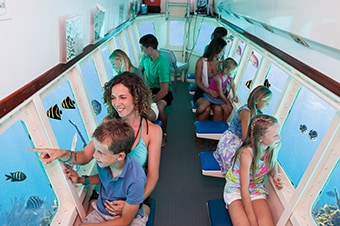 What you will visit:
The Antilla Shipwreck
Climb aboard the Seaworld Explorer, a semi-submarine that remains at sea level but with a hull that puts visitors five feet below the waterline, for spectacular views of the Arashi coral reef, an undersea world that lives in these crystal-clear Caribbean waters. The semi-sub will head towards the wreck of the Antilla, a German freighter that was sunk off the coast of Aruba during World War II. A narrator details how this 440-foot-long freighter met its watery end. The Antilla is encrusted with coral formations, and tropical fish, lobsters, orange anemones and shrimp now call it home. The local pelicans are quite familiar with this attraction and like to perch on the Antilla and enjoy a meal.

Casibari Rock Formations
On the flat island of Aruba, there is an unusual presence of huge monolithic boulders and towering rock formations. These geological formations add relief to the landscape and a glimpse into the island's ancient past. Casibari boulders are clustered together weighing several tons and creating unique forms. There are walking trails through this rock garden, and a climb to the top of the highest boulder rewards with panoramic views.

Baby Natural Bridge
In 2005, the Natural Bridge, a coral limestone formation chiseled by years of pounding waves and powerful winds, collapsed to the dismay of locals and tourists alike. But a smaller bridge, the intact Baby Natural Bridge, is a structurally sound arch carved out of rock and coral and a photogenic island highlight.

What you will see along the way:
Bushiribana Gold Mine Ruins
In the 1400s and 1500s, adventurers traveled the waters of the Caribbean in search of treasures. Legend tells that one island, named "Oro Ruba," which translates to "red gold," is now the island of Aruba. These historic gold mines, believed by the Spanish in 1499 to hold great hoards of gold, were soon abandoned when very little of this precious metal was found. In 1824, gold was discovered near a pirate hideaway called Bushiribana. A large smelting plant was built in 1872, and for the next 10 years, it was used to extract gold until it was depleted. Today, the crumbling plant looks almost medieval in its dilapidated appearance.

Photo Opportunity:
California Lighthouse
Named after the steamship California, which sank off the coast of Aruba, this iconic stone lighthouse, built in 1910, offers picture-postcard views of the expansive coastline.

Shopping:
There is a small gift shop at the Baby Natural Bridge.

The California Lighthouse is currently undergoing restorations however the views are unchanged. Tour sequence may vary. Passengers with cameras should use 400 ASA or higher speed film onboard the Explorer for best results.

Walk from the bus to De Palm Pier

Walk from De Palm Pier back to the bus