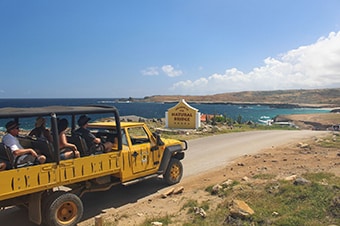 What you will visit:
4WD Vehicle Adventure:
Because of the often rocky surfaces, uneven roads and narrows paths, this 4WD excursion is not recommended for children under six or those over 350 pounds. It's also a good idea to wear comfortable clothes (don't forget to wear a swimsuit).

Casibari Rock Formation
These geological formations add relief to the landscape and a glimpse into the island's ancient past. Casibari boulders are clustered together weighing several tons and creating unique forms. There are walking trails through this rock garden, and a climb to the top of the highest boulder rewards with panoramic views.
Baby Natural Bridge
In 2005, the Natural Bridge, a coral limestone formation chiseled by years of pounding waves and powerful winds, collapsed to the dismay of locals and tourists alike. But a smaller bridge, the intact Baby Natural Bridge, is a structurally sound arch carved out of rock and coral and a photogenic island highlight.

Bushiribana Gold Mine Ruins
A lively history of gold prospectors has shaped Aruba's heritage. These historic gold mines, believed by the Spanish in 1499 to hold great hoards of gold, were soon abandoned when very little of this precious metal was found. They should have waited about 300 years. In 1824, gold was discovered near a pirate hideaway called Bushiribana. A large smelting plant was built in 1872, and for the next 10 years, it was used to extract gold until it was depleted. Today, the crumbling plant looks almost medieval in its dilapidated appearance.

Arashi Beach
Powdery white sand stretches toward dazzling waters superb for swimming. This pristine beach does not have facilities.

What you will see along the way:
Aruba's northeast coast faces the deep blue Atlantic Ocean. This rough sea has created a rocky shoreline with coral plateaus and small cove beaches. Inland, the arid terrain is studded with cacti and Aruba's divi-divi trees, considered a natural compass because they point in a southwesterly direction due to the trade winds that blow across the island's northeastern waters.
Photo Opportunities:

Alto Vista Chapel
A winding road dotted with crosses brings you to the top of a hill on Aruba's north shore, where this brightly painted, yellow chapel stands proudly. In the early 18th century, Catholic Indians settled in the area. The original chapel was built by an Indian from Santa Ana de Coro, Venezuela, in 1750. The present chapel was completed in 1952 and is also known as Pilgrims Church.

California Lighthouse
Named after the steamship California, which sank off the coast of Aruba, this iconic stone lighthouse, built in 1910, offers picture-postcard views of the expansive coastline.

Snack:
A light refreshment will be provided during your adventure.

Bring adequate sun protection. This tour is not recommended for passengers who are pregnant or have back, neck or kidney problems. The maximum weight limit per person is 350 pounds. Minimum age to participate is 6 years old. Once participants join their tour, they will be required to complete a liability waiver. Some venues charge 50 cents for the use of the restroom.

No pregnant women or people with back, neck or kidney problems allowed.

Drive from Main Office De Palm Tours back to Cruise Ship by bus.