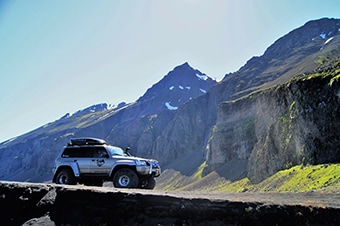 Spend the day in the picturesque countryside aboard a 4x4 vehicle and visit some of the north's most popular and breathtaking attractions. Driven by a professional guide, the Super Jeep is equipped with massive tires, GPS and protective gear assuring you a safe and comfortable ride. Be sure to bring a camera to capture all the day's unforgettable and awe-inspiring moments.

The adventure begins at the pier as soon as you hop inside the Super Jeep. From here, your driver/guide will take you through Akureyri and out into the rugged and untouched wilderness. Then, you'll take an eastern trail that rises over an old mountain road that affords marvelous views of Eyjafjordur, Iceland's longest fjord, and the surrounding mountain ranges. Further on is the mighty Skjálfandafljót River, which has gouged about a mile out of a lava field that's approximately 7000 years old.

Further on, a stop awaits you at Barðardalur Valley; you can get out, stretch your legs and snaps photos of the lush, green valley dotted with patches of lava.

Back on the Jeep, you'll drive to the breathtaking beauty known as the Aldeyjarfoss Waterfall. Enclosed by an otherworldly moonscape of ancient lava, the waterfall is framed with tall columns of black basalt, which makes a startling contrast against the white water cascading 65 feet into the Skjalfandafljot River.

From the waterfall you'll drive along a mountain road to Lake Myvatn, which lies at the heart of Iceland's most geologically active district. Although the stop is a short one, you'll have a chance to breathe in the cool, crisp air and marvel at the fantastic landscape.

Next, you'll head to Skutustadir where large craters situated on the southern shore of Lake Myvatn are called pseudo or rootless craters that were formed when lava overflowed the lakeshore's sodden ground.

By now, you've probably worked up an appetite so it's time for an enjoyable sit-down meal at a local restaurant.

After lunch, you'll reboard the Jeep for the return trip back to the pier. But your day's not over yet. Your last stop is Godafoss Waterfall, the thundering "waterfall of the gods." which stretches 90 feet and tumbles more than 35 feet into the Skjálfandafljót River.

This breathtaking area is also steeped in history. In 1000 A.D., Thorgeir Thorkelsson, a local pagan priest, and the Icelandic parliament, or Althing, decreed the island would convert to Christianity. To commemorate the decision, Thorkelsson hurled his statues of Norse gods into the waterfall. Snap off some impressive shots of the beautiful crescent-shaped canyon with its cascading falls before reboarding the Jeep for the return route to your ship.

This tour is not recommended for persons with mobility problems as the vehicles are not easily accessible. Not recommended for guests with recent back or neck injuries. The off-road trail is on very rough terrain.