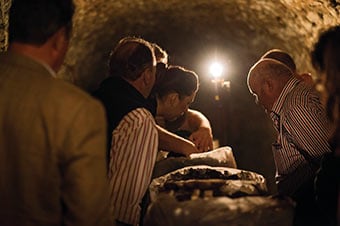 The Jam Factory
A dynamic combination of exhibition, retail and studio spaces for South Australia's artistic community, The Jam Factory showcases ceramics, glass, jewellry, metallurgy and furniture making. Conceived in 1973 and originally housed in a converted jam factory that lent the project its name, the organization moved to its current, purpose-built location in 1992. It is home to the flagship retail store, four gallery spaces, four fully equipped studios and an additional 10 independent studios offered to independent artists.

Maxwell's Restaurant and Winery
Mark Maxwell inherited his love of food and wine from his father, Ken, who started a small shed winery in 1971. When Mark bought a small vineyard of his own in the 1980s, he made sure it included a restaurant-one of only a few wineries in the area to do so. He has expanded to almost 100 acres of award-winning vines and produces Maxwell Mead, Australia's favorite honey wine, made by the fermentation of pure South Australian honey. Maxwell's property is also home to an award-winning restaurant, the domain of master chef Fabian Lehmann, who creates culinary masterpieces from locally sourced, seasonal ingredients.

Journey to the McLaren Vale wine-growing region, home to many world-class wineries. The moderate Mediterranean climate serves to produce excellent Shiraz along with Grenache and Cabernet. Nestled in gorgeous McLaren Vale, just a 45-minute drive south of Adelaide, you'll travel through one of the premier wine-growing districts in Australia and home to some of the world's oldest grape vines. Enjoy panoramic views of the rolling Mount Lofty Ranges, sprawling vineyards, sun-dabbled countryside and Gulf St. Vincent beaches.

Lunch/Tastings:
At the acclaimed Maxwell Restaurant and Winery in McLaren Vale, participate in a tasting of iconic wines, some directly from the barrel. Lunch is an exclusive invitation to sample the culinary prowess of head chef Fabian Lehmann, who has forged his career in the Michelin-starred restaurants of Europe and prepares an exquisite three-course tasting menu. Finally, sample several Australian meads, including sparkling, honey, spiced and liqueur, paired with decadent sweets prepared by pastry chef Jason Brown.

Travel to The Jam Factory

Travel back to the pier